Power Up Your Business with a 100kW Solar System

And cut your power costs for good.

Thinking of installing an 100kW solar system for you business? With more and more businesses searching alternative affordable and a reliable source of electricity for their day-to-day operations a lot of them are turning to solar power systems.

Here at Go Green Home, we are able to offer solar panel and inverter solutions Australia-wide, we have completed solar panel installations across Melbourne, Adelaide, both Brisbane and Gold Coast, Sydney, and anywhere in between.

The big daddy of them all, our 100kW solar panel system provides powerful and efficient energy solution and delivers plenty of solar power for both large businesses and commercial facilities.

100kW solar systems are among the most common commercial solar system sizes in Australia, owing to the fact that this is the maximum scale at which the federal government will provide up-front incentives. Read on to find out about the essential factors that businesses should be aware of if they are considering installing a 100kW solar system on their commercial property.

If you’re looking for a competitive priced 100kW solar system for your business, then look no further. Give the team at Go Green Home a call today for an obligation free quote.

Get a Quick Quote on 100kW Solar System for Your Business

How much does a 100kW solar system cost?

Due to a variety of conditions, including Australian government incentives for renewable energy, increased competition between solar panel installers and component manufacturers, and worldwide manufacturing patterns, the cost of installing a solar system has decreased dramatically in recent years. When combined with growing commercial power prices, solar systems in the 100kW range represent an attractive money-saving and investment opportunity for a wide range of business types.

Due to this, the use of commercial solar energy has expanded dramatically in Australia over the previous several years, with 2020 expected to be the country’s best year yet in terms of solar energy adoption.

According to the information in the following table, the average cost of a 100kW solar power system is $92,125 to $98,975, which includes GST and the STC upfront rebate.
From our Commercial Solar PV Price Index, the graph below depicts average price trends for 100kW solar systems since Go Green Home Solar began taking stock of industry prices in Feb of 2015.

How much energy does a 100kW solar system yield?

Factors in calculating the yield of a 100kW solar system

It is possible for solar PV systems to produce more or less energy depending on a variety of conditions. The orientation and tilt angle of the solar panels, the presence or lack of shadowing, the typical operating temperature of the system, and the quality of the system’s components are all factors to take into consideration. When a system is developed, all of these considerations are taken into account in order to arrive with a fair estimate of how much power will be produced by the system once it is operational.

An important factor in determining the theoretical maximum amount of electricity a flat-panel 100kW solar system (or any flat-panel system) can produce is the quantity of incidence sunlight falling on the region where it is installed throughout the course of a day, month, season or year. Of course, the amount of sun irradiation received by different parts of the country varies from one another.

Using Australia as a base point for comparison, a system in Australia will produce 4 kilowatt-hours (kWh) per kilowatt of installed capacity every day on average throughout the year. This amount will, of course, be greater in brighter areas and lower in less sunny locations (Brisbane, for example, receives more sunshine than Hobart), and it will vary depending on the season and the location (power generation is higher in the summer thanks to the longer days).

If you’re in need of a solar energy system, Go Green Home Solar can assess this for you using local BOM data and an analysis of the roof area you have available utilising Nearmaps software for your project.

A look at the output of 100kW solar panel systems installed by Capital City:

Solar power systems generate more electricity in the summer than they do in the winter.
When installed in Sydney, NSW, a conventional 100kw solar PV system would generate about (3kWh x 100kw =) 300kwh on a winter day, but when installed in Melbourne, the same 100kw solar PV system would generate approximately (5kWh x 100kw =) 500kwh. In Brisbane, a comparable system may generate as much as 350kWh per day in the winter and 550kWh per day in the summer.

What is the return on investment for 100kW solar systems?

We have found that, on average, payback periods for appropriately sized commercial-scale solar systems in Australia are around 4 years, with internal rates of return (IRR) typically reaching 20-30 percent in every state and territory in the country. This is based on current data from the industry.

Having said that, the investment case for building a 100kW solar system is dependent on the specific conditions of the installation.

The following are the major elements that impact the return on investment of solar systems:

(1)   The system’s initial and continuing expenses, both in terms of money and time.
(2)   The cost of energy from the mains
(3)   Payment/financing methods to be used for the system
(4)   The feed-in-tariff, if any, that applies to surplus energy that is fed into the grid or sold to a third party.

These are explored in further detail below:

(1) The system’s total cost of ownership

The expenses of a 100kW solar system that we have detailed above (for example, $93,340 inc. GST in Sydney as of mid 2020) are average pricing for installations that do not include substantial additional fees for difficulties. We have installation prices for needed extras such as switchboard upgrades, crane hire, ground-mounted systems, tilt frames, and micro-inverter systems available through our tender management service. Using a competent installer who specialises in commercial solar like Go Green Home Solar, you can be assured that you are getting the greatest price and value for your system.

(2) The cost of electricity

Generally speaking, each company has a unique position in terms of their purchasing power with merchants and their capacity to obtain favourable interest rates. The number of sites owned by the business and with which it may bargain in order to secure a contract, the geographic location and distribution network provider, peak demand, and the time of day when power is consumed are all factors that influence electricity prices. In general, the higher your power prices are, the greater the return on investment (ROI) for a solar energy system.

(3) The funding of the system

Solar can be funded upfront with a payback time of two to five years, however many firms have proceeded under a financing arrangement on a cash flow positive basis. This indicates that the loan repayments are less than the savings generated by the solar system. The business case demonstrates a small cost savings during the life of the loan and a significant reduction in operational expenses at the conclusion of a five- to ten-year finance arrangement. Solar financing rates are frequently reasonable, ranging between 4% and 6%, depending on the size of the project and the credit rating of the borrower.

Put simply, commercial-scale solar systems are developed and installed to reduce or eliminate electricity costs because the majority of commercial energy use occurs during daylight hours. Having said that, a feed-in-tariff might be the cherry on top and provide some advantage to solar electricity that is sent back into the grid — for example, over the weekends.

A business case is typically used by Go Green Home Solar to demonstrate that a solar project is viable even without a feed-in tariff. While there is no mandatory minimum for solar projects, it is not guaranteed that a 100kW system will be permitted to export solar energy by the local grid as there is in most states. 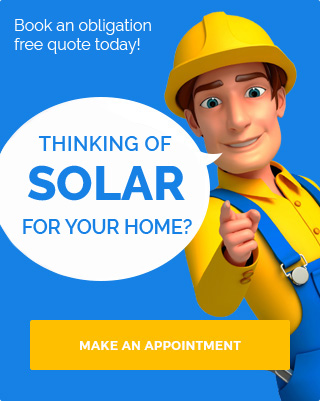